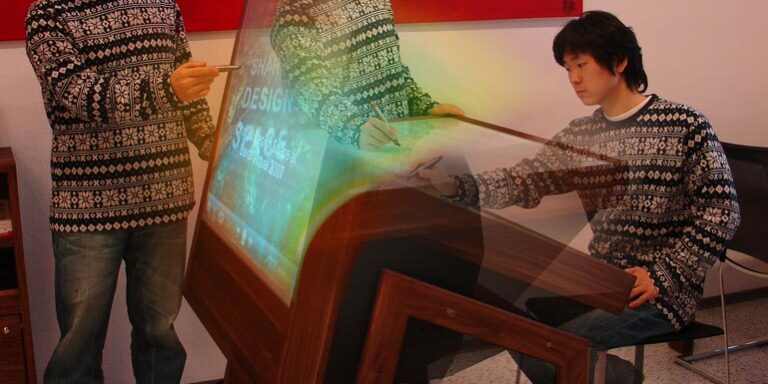 Flux is an interactive touch sensitive surface that can be used either as an interactive table and/or as a digital whiteboard. The surface is based on a rear-projection screen providing both multi-touch and multiple pen interaction with individual identification. Flux was developed together with our partner Team7.

Interactive, multi-touch devices are rapidly increasing in popularity across many industries. Flux allows multiple modes of interaction in a variety of configurations, allowing increased flexibility, usability and productivity.

Flux’s application interface is automatically optimized for the intended use depending on its orientation. Flux can be used as a sketch board, a discussion table or a white-board. Transformation between different orientations is single handedly achieved easily and elegantly. Rear projection, in conjunction with FTIR and Anoto pen tracking allows multi user, multi modal interaction in every configuration.

Flux has the following novel features:

Flux provides unmatched flexibility and capability in setup, use and user input. It will set the path for a new generation of interactive surfaces.

Bernard Doray and Paul To and Michael Haller and James Powell and Peter Brandl and Jakob Leitner and Thomas Seifried and Moses Ma, 2008.
A Multi-Touch Screen incorporating pen tracking, 2008. Nortel Docket No. 7000-622.