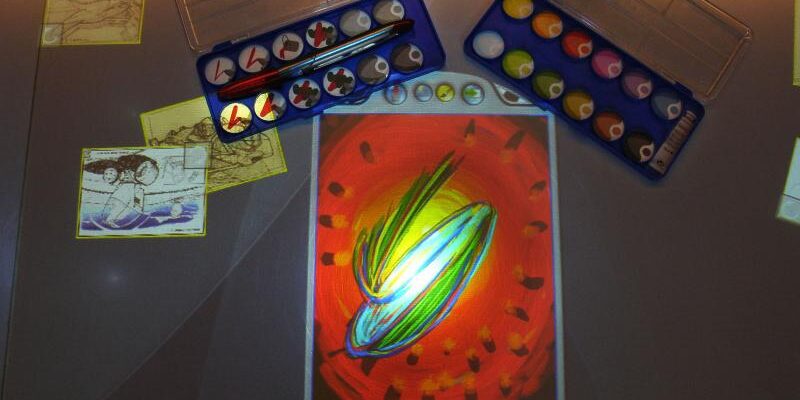 Collaborative Augmented Reality setups are becoming increasingly popular. Instead of using head mounted displays (HMDs), we have developed the Shared Design Space, a collaborative tabletop environment that is designed for brainstorming and discussion meetings. Using a digital pen, participants can annotate not only virtual paper, but also real printouts. By integrating both forms of physical and digital paper, we combine virtual and real 2d drawings, 3d models, and digital data which are overlaid into a single information space. We have integrated these devices together in a unique way and present an application where they can be used efficiently during a design process.

The Shared Design Space combines a number of diverse technologies to create a unique interface, including:

Each of these elements is not unique in itself, but this project combines them in a unique way to create a new collaborative interface. In our setup, users can pick-up digital data from the table (e.g. video, image) and drop-it on the real paper by using the digtial pen. Once the user taps a digital object on the interactive table, the content manager automatically binds it (virtually) to the pen. Whenever the user moves the same pen onto the real paper, the manager transfers the data to the server that displays it on the interactive table.

This interface allows users to easily explore design options in a creative context through an intuitive interface of real and virtual artist and designer tools. Using computers in a face-to-face meeting can disrupt the creative process because communication cues cannot be shared as easily as in natural face-to-face conversation. The Shared Design Space allows people to communicate as they normally would around a table and enhances this communication with intuitive collaborative tools. This work points to a future where computers will be able to naturally support face-to-face meetings and creative design sessions.